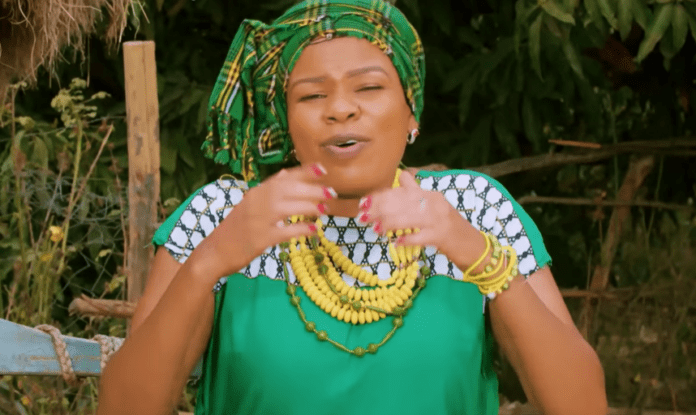 Gospel artist Stella Mengele’s latest song ‘wikia kyau’ loosely translated as ‘what are you fearing’ has been received well by her followers who have appreciated the message of the song.

The video was filmed in a traditional African setting resembling a family with a father, granny, a mother, her friend, and a son. The son’s wife (Stella) doesn’t know how to hold the broom while sweeping the compound. Some women make fun of her and she runs away from the home.

So far the song is trending at number 16 on YouTube with over 47,000 views barely 4 days after release.

‘What are you fearing and there is God who can’t be defeated, we have a God so don’t fear anyone or anything. Don’t fear because we have a God,’ Part of the song goes as translated.

Below are some of the reactions to the song;

Agnes Casandra said, “Everything has a solution and is very possible when we trust in God. He fights our battles and makes us winners.”

Christopher Mutisya said,” Released on the day of Supreme Court Ruling to declare God rules in our lives. The traditional setting is perfect, my 72-year mum has to hear this.”

Ruth Pearl said,” A song with a great lesson, what looked as a problem became easy to deal with, the granny offering a leso to her daughter-in-law is it for me. God is all we need to have solutions to the ever-rising issues.”

Pastor Charles Musyoka added, “Sure we have God, able and faithful, working on our behalf, congrats to our sister, Mengele you never disappoint. Praying for your ministry may God glad you wisdom and knowledge, understanding, humbleness, and humility may be your guidance every day.”

Tiktok users have since began a challenge for the song that has gone viral.

Stephen Kasolo also released a gospel song with the title ‘pokea sifa’ which is trending at number 27 on YouTube with nearly 100,000 views. The song is a worship song talking about how far God has brought the singer.

Below are some of the reactions by fans of the singer on the song;

Felister Muli said,” I’m always listening to your songs 100 times a day because some of them as so encouraging and touching. May God bless you and may you never lack.”

Millicent Wanjiru Kiura said,” For sure pokea sifa Mungu umetenda mengi, for sure Kasolo your messages are great, and love your music. May God keep remembering you and uplift you to high heights. Mungu ni wa ajabu kweli tumpe sifa kila wakati.”

Are you an artist and want us to review your song or publicize it to our audience majorly from Lower Eastern Kenya? Reach out on 0737733010.