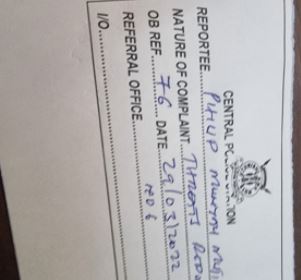 Matungulu MP Aspirant Dr. Philip Munyao has come out to claim that his life is in danger.

Addressing the press after recording a police statement at the Central Police station, Dr. Philip said that he had been receiving threats from unknown people in the last two months but for the past few days he had come into contact with two men.

The politician said that in the past few days while running his errands in Nairobi he had been confronted by two guys who started provoking him but he ignored them, he noted that the two gentlemen in their 50s were armed.

Munyao added that the two guys trailed him while he was running his errands today and when he noted that they had followed he stopped but the guys disappeared.

“I have been receiving threats for the last few months and in the past few days, it has become more serious. There are people who have been sending people to follow me. In February, three armed men had been sent to Kilimani to harm me but they failed, “The aspirant went on.

“Yesterday in Nairobi CBD in my car, some men approached us and they started talking in a way to provoke us but when they saw we were calm they went away. Today at 11 pm, I parked my car and while going to an ATM we saw the same men and they crossed the road approaching us but when I starred at them they disappeared,” he added.

Philip retaliated that he was not going to be swayed from his mission to help the people of Matungulu if elected MP saying that he was going to be on the ballot come August 2022.