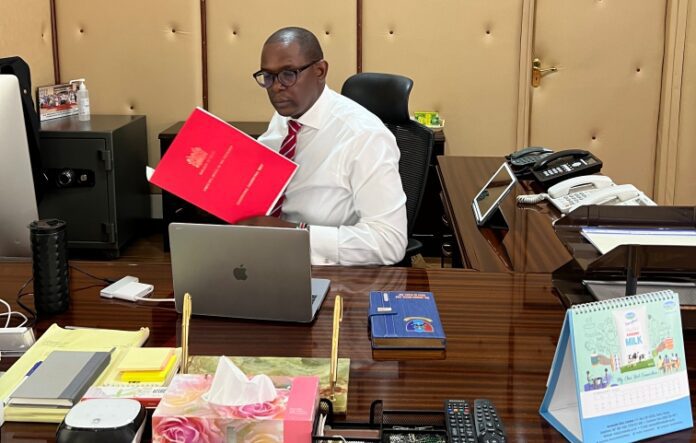 Machakos Gubernatorial aspirant Nzioka Waita says he will ban Muguka sale in Machakos county on his first day in office if he is elected.

Nzioka noted that the trade had affected many youths who continue to sit for the whole day just chewing Muguka yet the county does not benefit in any way from the sale.

According to Nzioka, only the counties that produce Muguka benefit hence it will be in his list of day one priorities to ban the drug that is in all market centers in the county.

“One of the duties of county government is drug control. And When I say drugs I Don’t mean Panadol. I mean the drugs finishing our young men and women. Muguka is grown just after Kitengela, I Don’t know if you guys know.” Nzioka said.

“These guys cut horticulture to plant Muguka. One farm I know has about 50 acres. They have employed one person to take care of the line because that’s how much they are making from us. The whole of Ukambani is high on Muguka. We shall ban it on the first day. Our people are not the ones planting it, we must stop it unless someone teaches us how to plant it. We must take a stand. “A tough-talking Nzioka added.

On the People living with disabilities, the ex-statehouse chief of staff promised them a CECM and chief officer position and round tables at least once a year together with other organized groups.

“The only level facility that has received money is Kathiani. In Athiriver we have an empty building sitting there and Mavoko we have a population of hundreds of thousands of residents who have no access to level 4 hospital. I’m told the reason the hospital has not been finished is that it was built by a politician they had an issue with… That hospital must be built, it is locals to use not Wavinya.” Nzioka went on.