Governors Wavinya and Mutula differ with Kalonzo on working with Ruto 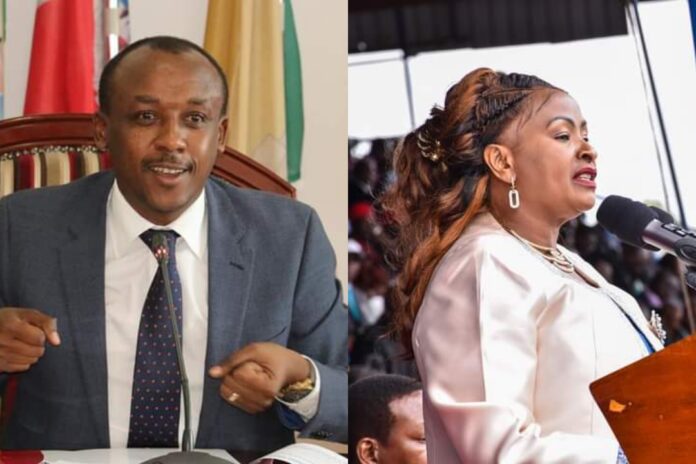 Machakos Governor Wavinya Ndeti and the Makueni counterpart Mutula Kilonzo Jnr have vowed to work with President William Ruto to get development for their people.

Wavinya noted that the National government has 85 percent of the budget whereas county governments have 15 percent thus to get development in the counties there is a need for a collaboration between the two governments.

The Governor however added that the Kamba community should support Wiper leader Kalonzo Musyoka.

Her words were echoed by Makueni Governor Mutula Kilonzo Junior who spoke at the burial of Kituu in Kikima, Mbooni. Mutula noted that he will also work with President-Elect William Ruto and his government to ensure that his people get the development that they needed.

“I told Maanzo that they won’t win the presidential petition because we forgot the law we made, even our chief agent had already joined the other side. We told the community we are taking them to the government and we won’t keep them in the political cold again. we are tired of throwing stones, leave that Babu and TJ Kajwang. Thwake has no money, Konza as well. We have to see what to do to help the community.”Mutula said.

Wiper party leader Kalonzo Musyoka speaking at Mukalala primary at a funeral service said the region will remain in the opposition adding that it has nothing to lose. Kalonzo also denied meeting Ruto last week.

“You remember me saying that the August 9 General Election was also a dress rehearsal for my 2027 presidential race. Let us now focus on 2027. Five years is a short time. We are going to serve in the opposition the best way we can and we are ready for that. So do not worry,” He said.

“You know we did not agree at all with the verdict of the Supreme Court but we are bound by it. We shall swallow that pain for the sake of our nation. We are ready to swallow the pain,” he added