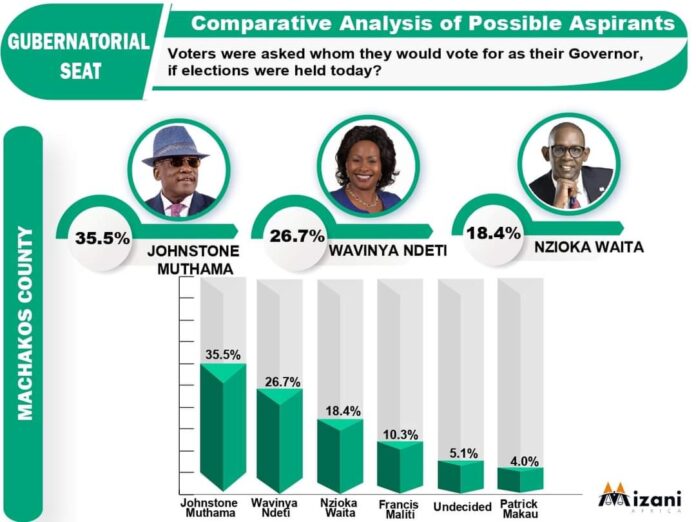 Mizani Africa has released opinion poll results for Machakos Governor, Senator, Women Representative, and all MPs in the county 8 constituencies.

Machakos Senator Agnes Kavindu according to the poll would be reelected if elections are held today with 33.5 percent. Urbanus Muthama of UDA in the poll emerged second with 30.6 percent, Chris Mutinda with 17.5 percent, Timothy Maingi 10.5 percent, and Antoh Noah 4.9 percent. 1.6 percent of the locals were undecided.

Robert Mbui of Kathiani constituency would retain his seat if elections were held today according to the poll with 53 percent followed by Mwaya wa Kitavi at 26 percent, Gerald Wambua 10 percent, and Mathew Munyao 6.7 percent.

In Mavoko Patrick Makau who has since decided to vie for Governor would garner 31 percent if elections were held today followed by Philip Mutua at 25.4 percent, Charles Wambua 15 percent, Anthony Ngunga 14 percent, and Felix Mambo 7.3 percent.

In Masinga constituency according to the polls, Benson Wambua would win with 51 percent followed by Jackson muthini at 20 percent, Joshua Mbithi 17 percent, Lawrence Maingi, and David Mutuku at 3.4 percent.

In Yatta constituency, Charles Kilonzo according to the poll would win at 24 percent, he would be followed by Robert Ngui at 22 percent, Francis Mwangangi at 19 percent, Michael Kasimba at 16 percent, and Vero Mwongeli 3.2 percent.