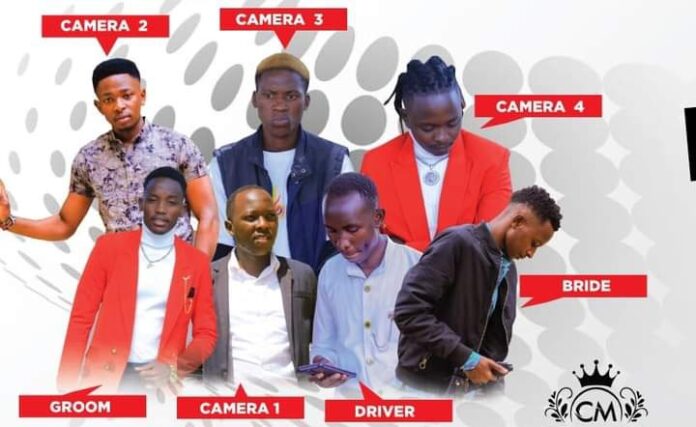 Kitui has been trending for the last week after a viral video emerged of a bride being chased by her bridegroom in the streets of Kitui.

The video brought up a lot of mixed reactions with some netizens believing that it was real while others speculated that it was acting.

The team of seven young men behind the viral video revealed that the bride was a man and not a woman as many people thought.

Led by Dan popularly known as Dan wa Crown media the team revealed that they brainstormed and came up with an idea of breaking the monotony of Kenyans who always think that weddings never turn sour.

“I called my friends and asked them how we can do a unique thing about the wedding that can trend in the whole country -we pretend that it is a wedding that backfired to see how they will react,” Dan stated.

The team had three cameramen led by Nicholas Mbuvi who shot from the bus park where the bride started running, the other was the camera that would follow the groom when running to get the bride and the third camera was strategically placed around the Kitui Quick Mart Supermarket to take good angles of the video.

Dan who was the bride said that he got the wedding gown and car from his mother and put balloons in the car to get set for the venue.

“After I alighted from the car, I removed my shoes to make the people know that it was real that I was escaping; the shoes I stole from my sister. I was a bit tensed and at some point, we had to quit because it seemed impossible but I said that I should start the drama because I was the one to start first,” the ‘bride’ explained.

The team further stated that after they started their drama people who were at the Kitui bus park filled the place as they watched the whole thing in disbelief wondering what was happening.

“When I was running there were people who nearly caught me. there was one man who was driving a car who held me and I whispered to him that we were acting the whole thing and he released me. I heard another person saying that the kind of steps I was taking when running was of a man and not a woman but they couldn’t see me because I was wearing a wig and hid my face beneath the gown,” the ‘bride’ added.

“I struggled to get the best shots although the camera was very heavy and the ‘bride’ was running swiftly, I was tensed by how the people were staring at the ‘bride’ and some of the people knew me,” Davie one of the cameramen said.

The team revealed that the whole process took four minutes and then the cameramen later came back to take reactions from the people to get to know the mood before uploading it online.

The team consists of youths who have ventured into photography, dancing, and modeling, led by Dan who is a young renowned photographer in Kitui.