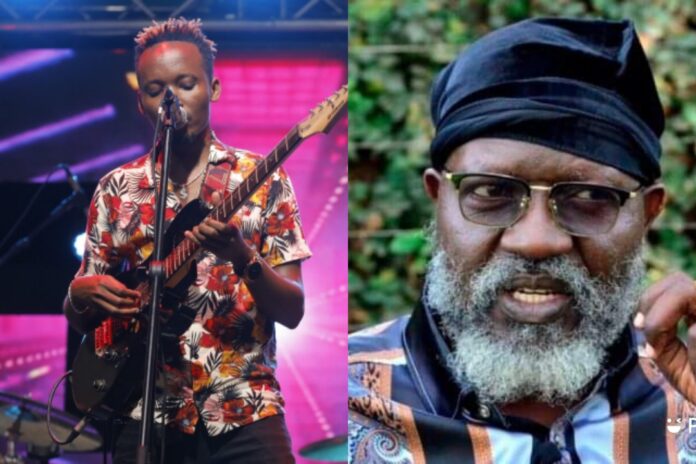 Kamba Benga Artist Alex Kasau Katombi has endorsed Prof. Wajackoyah to be President in the August, General elections. Taking to his Facebook Page, the singer disclosed he didn’t have a choice for president but had now made up his mind.

“Mimi sikuwa na choice ya president, why? The reason being wenye walikuwa niwale wale tu.. Why do we think someone who is in the government for 10 years as Deputy President can be president and change anything? Come on.. he is there and we all know who he is and what he did? He is out there lying again and you are there cheering hustler ndia…” The singer dismissed Ruto’s candidature.

“Mwingine ni yule tu he has been there for more than 30 years hati baba baba miaka nenda miaka rudi what changed? Now anaitwa baba na mama.. all they do is tell us the problem of each other.. sasa utaskia wakianza kuingilia my president .. But look at Wajackoyah the 5th.. he thinks about freedom. I will vote for him, not because of bangi ama nyoka but because he is new and he thinks outside the box.. jah bless let’s vote for the change.” Katombi dismissed Raila’s candidature.

Katombi noted that he had not smoked bhang and had not been paid to promote Wajackoyah.

Below are some reactions to the remarks by the singer;

Samson Kimeu said, “The guy is a strategist, he really knows the problems Kenyans are facing and he articulates for the fast optimal solution before bad turns to worst. Same here I had no intentions to vote but have turned out to love how this guy reasons. Wajackoya the 5th.”

Mutunga Max said, “This election will test the ability of Kenyans to think and make logical decisions. For once there is a candidate offering realistic solutions and who is different from the usual corrupt politicians we have been recycling. It’s up to Kenyan voters.”

Nicholas Mumo said, “I get you loud and clear, but even if my vote doesn’t count, majority of Kenyans will still elect them, we have no choice we remain undermined for life, handouts have spoiled the electoral system in Kenya, wale wa pesa nane watakushangulia rais na Maisha isonge.”

Spurgeon Muthusi said,”Alex Kasau Kulukulu please to a wimbo ya the 5th. We need to change the conversation. I wish we can overwhelmingly vote wajackoyah the 5th. He is of independent thinking.”

Wajackoyah has been trending on social media in the last week. Some of his proposals include; a 4-day working week which will see weekends begin from Friday to Sunday, Salary payment after 2 weeks, growing of industrial/medicinal Marijuana, and snake farming among others.