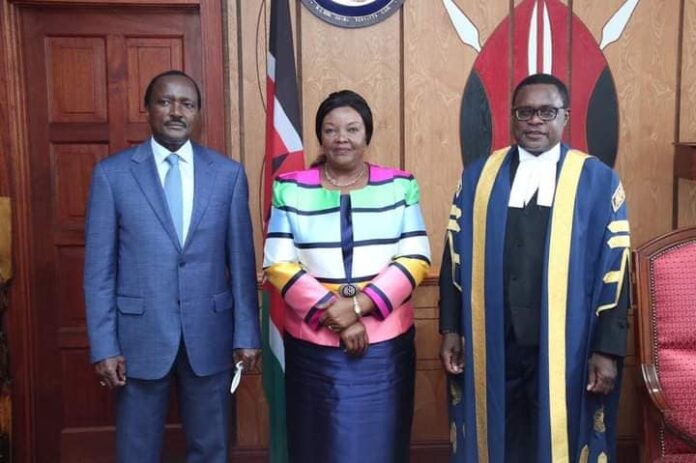 The Machakos senatorial campaign was a heated one, Agnes Kavindu Muthama was Tuesday lauded by senators over how she carried herself during the campaigns. The senators spoke in a senate sitting after her swearing-in and here is what some had to say;

“We must say this, for the record, the men in Machakos who were competing with Muthama, changed the rules…created misbehavior, insults, used everything possible including family to besmirch the character of Agnes Kavindu because she’s a woman. It’s very sad. ” Makueni senator Mutula Kilonzo Junior said.

“But just like Jesus said when he was being crucified, this lady Sen Kavindu impressed me, she said, “forgive these people”. We are very proud of you Sen. Kavindu for your victory.” The vocal senator added.

“I participated in the campaigns for Sen. Muthama. What touched me most is that on the day Sen. Muthama presented her papers, the first post-presentation rally, she stood in front of a mammoth crowd and said this, “I know you people have a lot to say against my former husband, Sen. Muthama, remember he’s the father of my children and I don’t want to hear people bastardizing him.” It can’t be greater than that, it can’t be more humane than that. !” Bungoma Senator Moses Wetangula said.

Senator Abshiro Halake also lauded the Wiper party for giving women a chance to fly the ticket in the Machakos senatorial by-election saying, ” This goes to show that when a woman is given a chance, she will deliver and she has delivered. I want to congratulate the Wiper Party and I want all political parties to take a cue from the party leadership to make sure that their flags are flown by women.”

Vihiga Senator George Khaniri lauded the Wiper party for having 2 women senators and 2 male senators praising Kavindu for maintaining respect despite the heated campaigns saying,” Kudos! You put up a very good fight. I was following your campaigns. As Sen. Orengo says, as others went low, you insisted that you remain high. You are in the right place. This is a house where we do very mature debates. “

Senate minority leader James Orengo welcomed Agnes Kavindu assuring her that the Senate was the right and correct house for her and she’s part of this distinguished family.

” I want to congratulate the Wiper party for having faith in women. Because they’ve shown that actually when you nominate women even in the most controversial elections, they can win… Finally, she’s coming to this House at a very critical time and you know the role she has played. She has been part and parcel of the review of the Constitution. I know that we have a voice to guide us through this great debate that we are going to have on the review of the Constitution. I wish you well.” Orengo said.

Isiolo Senator Fatumo Dullo said, ” And I’m sure you’ll be able to fit in the shoes of our former colleague, the late Senator Kabaka. And I’ve seen the confidence in you when you told Governor for Machakos that you’re going to carry out your oversight responsibility.”

Kitui Senator Enoch Wambua lauded Kavindu as a God-fearing leader a leader of distinction expressing confidence that the people of Machakos will be well and ably represented in the Senate.