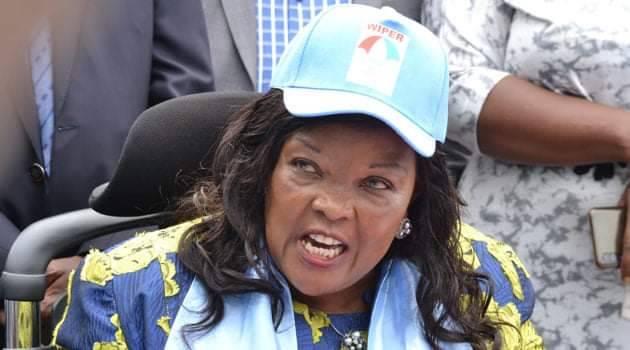 Wiper Senatorial candidate Agnes Kavindu Muthama has defended Wiper Party Leader Kalonzo Musyoka over remarks he made at Bishop Nguyo’s burial that he had taken her and would return her to her ex-husband Johnson Muthama as a senator.

Speaking at Matungulu Subcounty while meeting women groups Kavindu rubbished claims that she had been taken in by Kalonzo Musyoka saying that the relationship she had with Kalonzo Musyoka was political, not romantic as people claimed.

“Who does not have my testimony here? You know I am born again and free? Kalonzo Musyoka should be respected and not abused because as for me I am married by Jesus and my husband is Jesus, and I hear you are being rallied up for demonstration because you have been told Kalonzo has taken me, but let me tell you, my relationship with Kalonzo is political. All the other things, Kavindu I have left them and set free by Jesus, ” she said.

Kavindu reiterated that she was able for the job noting that the president has previously entrusted her to be in BBI taskforce.

On Wednesday Kalonzo Musyoka touched former Machakos Senator Johnson Muthama on the nerve after he publicly told him that he was going to give him his ex-wife Agnes Kavindu back as a senator remarks which stirred mixed reactions.

“But in all things, I can see Muthama will run next year to Kalonzo’s chest and in submission say it is okay. He knows where we are and we are headed there. I will return his wife to him and tell him Your wife is here she is a senator. ” Kalonzo said.

Wavinya called on leaders to respect each other and exercise restraint in public.

“How do you call yourself Honorable if you can’t respect yourself and go to fight before people. It is a shame. Leaders let us treat ourselves honorably. In Kenya, we want peace, not war. We don’t want wheelbarrows in Ukambani.” She said.

Matungulu MP Stephen Mule took a swipe at UDA saying the party does not have commoners and he took tycoons reiterating that Kalonzo Musyoka will be on the ballot come 2022.