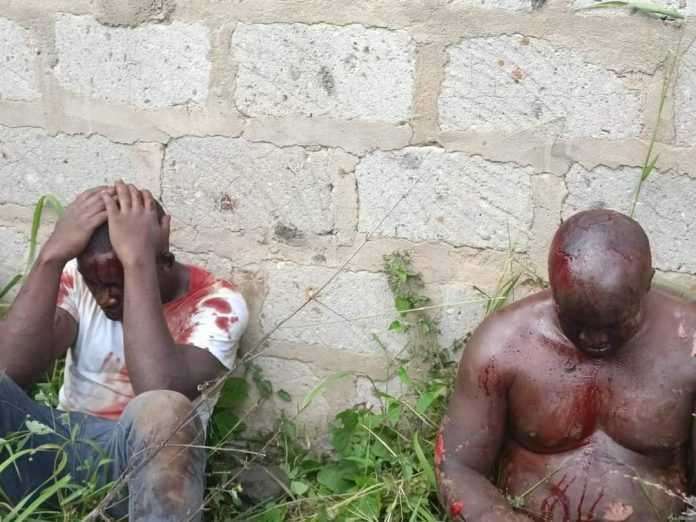 Two men who were found in possession of stolen household goods escaped death narrowly after irate locals descended on them in Site estate in Kitui town.

The two were cornered by an angry mob after their other two colleagues escaped with their getaway car, they received a thorough beating and were nearly lynched before the police came to rescue them.

After they were asked questions, the two men revealed that they came from Huruma Estate in Nairobi in a Toyota Axio which the other thugs escaped with.

Albert Mungai a resident of Site Estate said that he was at work when he was informed that there were thugs who broke into his house. Before the two were cornered by the residents, Mungai revealed that those who escaped had already made away with a few household goods such as laptops, mobile phones, and other accessories.

“I was at work when I was told that there are thieves in my house. I was assisted by the Boda Boda guys who helped me catch the two. We found a car in the parking which nearly knocked one of the Boda Boda riders. When I got into the house, we caught the two men before they could escape and when we asked them they said there is a man residing here in town who helps them to locate houses where their owners are not around,” Mungai told Mauvoo News.

Mungai added that insecurity has been an issue in the area because it is now the third time his house has been broken and household goods stolen. The residents called upon the security agencies in Kitui to beef up security because in December 2022 suspected robbers also killed a middle-aged man in Kitui town.

“We have been having a lot of attacks from thugs, especially in Site and Savani estate, today we caught two of the thieves and we gave them a serious beating before the police rescued them. It is bad behavior and we request the Kitui OCS and commandant to ensure that they tighten the security in Kitui town,” Kyalo Philip a Kitui Boda Boda rider added.

The two injured thugs were taken to Kitui police station as detectives started manhunting their other comrades who escaped. Kitui residents have been complaining of insecurity, especially in Majengo, Savani, Site, Kalundu, and Kunda Kindu areas.