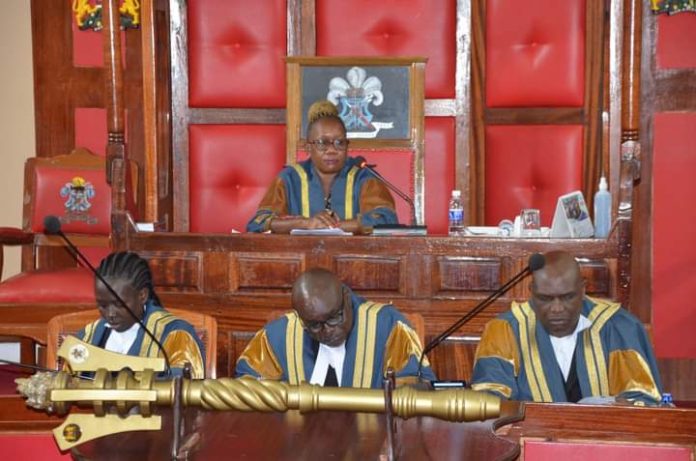 Machakos MCAs passed a report recommending the removal from office of 4 County Public Service Board Officials on the grounds of serious violation of the Constitution, gross misconduct, and incompetence. All 23 MCAs in the sitting voted in support of the report.

The four are; George Kioko Luka- Chairperson of the Machakos County Public Service Board, Onesmus Muia Mutisya the Secretary, Cecilia Mbinya Sereka- a Member, and Stella Nduku Muthoka- a Member.

Below are the allegations tabled in the Assembly against each of them;

On 13th July 2021, he allegedly presided over the inclusion of 4 officers into the payroll by purporting to reinstate them. The 4 are said to have never been employees of the County Government of Machakos.

Luka is also accused of letting the board operate without a substantive Accounting Officer and on 26th February 2021, un-procedurally purported to allocate an official vehicle to the Vice Chairman, KBX 810T for the single purpose of facilitating the hiring of her son, Samson Sereka as a driver.

“The Chairperson facilitated the hiring of 9 Officers among them the son of the Vice Chairperson, Cecelia Mbinya Sereka – Boniface Sereka. Through the abuse of delegated authority on 6th August 2020. The Officers were employed on contract effective 4th January 2021 to September 2022. The son was employed at the entry-level of Job Group K, without the necessary qualifications. On the 5th of October 2021, in a meeting convened and Chaired by the Vice Chairperson (Mother to Boniface Mutunkei) the terms of the nine officers were illegally changed to permanent and pensionable terms.” The report read in part.

“For instance, most employees of the County Public Service Board are on extraneous allowances despite the fact that they report to work at 8.00 am and leave at 5.00 pm. A look at the list of thirteen among them his daughter includes cleaners who are put on extraneous allowances for just what doing what they were employed to do.” The report further alleged.

Muia is accused of on 27th April 2020 writing to the Chief Officer of Public Service and Quality Management to unlawfully occasion illegal payments of extraneous allowances to 24 officers working in the County Public Service Board including himself.

Muia is also accused awarding of extraneous allowances to 13 officers including the Daughter of the Board’s Chairperson, Regina Wakio Kioko and dishonestly concealing the surname to hide her identity.

“That Mr. Onesmus Muia Mutisya wrote the Chief Officer, Department of Public Service and Quality Management on the 13th of July 2020 to deceitfully purport to reinstate to the payroll four officers claiming that there was a court order to that effect but where none existed. The said officers had never been on the County’s payroll and the same had been communicated by the CECM Public Service.” The report went on.

Muia is also accused of sexual harassment by two officers who allegedly wrote to the county secretary, threatening board members through advocates among other allegations.

Cecilia Mbinya Sereka is accused of not declaring a conflict of interest during a sitting on 6th August 2020 in the Recruitment and Selection Committee where her son Boniface Mutunkei Sereka was an applicant and was later recruited. She is further accused of in October 2021 convening a meeting to change the son’s terms to permanent and pensionable.

“That on 5th October 2021 Cecilia Mbinya Sereka convened a meeting under career progression and gave extraneous allowances to a group of employees among them the daughter of the Chairperson of CPSB one Regina Wakio Kioko, Deputy Sub County Administrator under job group P Kshs. 25,000 backdated to 1st July 2021. This had been declined earlier in December 2020.” The report claimed.

Stella Ndinda Muthoka was the Chairperson of the recruitment and selection committee which during a meeting on 26th February 2021 allegedly approved the appointment of a driver for the Vice Chairperson (Ceilia Mbinya Sereka) Samson Sereka on Job Group D.

On 17th March 2021, chaired by Stella Ndinda Muthoka under minute no. 293/03/2021, the recruitment and selection Committee deliberated on the matter of the appointment of a driver. This was allegedly based on the misrepresentation that the Vice Chairperson was a person living with a disability. The committee recommended a personal driver to serve with the official car allocated to her by the Chairman, KBX 810T. No certificate from the Council of Persons living with disability was presented to warrant for appointment of a personal driver.

“That Stella Ndinda Muthoka has been involved in undertakings of the Machakos County Public Service Board where there was an abuse of office and misappropriation of public funds through; Approval of extraneous allowances for specific officers yet the officers working on normal office hours and performing the duties listed in their appointment letters, Recruitment of officers without following the right criteria, Promotion of Officers without following the provisions of the existing laws and circulars, Appointment of Mr. Joseph Wambua as the Deputy Chief Executive Officer of the County Public Service Board yet such office does not exist in the Constitution.” The report went on.

The county Assembly established an Adhoc committee of 5 to investigate the allegations and report back in 10 days. The accused will have a chance to respond to the allegations.