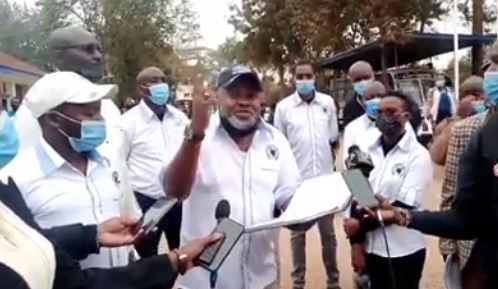 Over 500 Machakos University staff from different unions namely UASU. KUDHEIHA and KUSU have given a strike notice over what they termed as the administration not listening to their grievances.

According to Machakos University KUSU chair Muthama Karua, the unions blamed the vice-chancellor saying efforts to seek dialogue with the administration have not been successful.

“What has been happening is that we write letters and request for meetings and all those letters have gone unresponded except the last one which postponed the date of the meeting to 10th September,” Muthama said.

The 2017 CBA monies received by the university, the administration promised to pay from August but Muthama said they have not been involved as the local implementation committee and the meeting for 10th September the university will have already paid the money illegally.

“Our demands are very simple is that we have requested university management through our public petition to call us for a meeting within the next 7 days and if the meeting is not called within 7 days we will issue relevant notices for industrial action. It is notified in our public petition to the vice-chancellor.” The KUSU chair added.

The issue of promotions is among the major concerns raised by KUSU saying that some of the members have waited for 9 years despite having acquired master’s degrees.

The UASU Secretary-General Martin Kasina also blamed the administration that he said had made service delivery difficult for the staff.

“This university must be governed by existing documents, structures, policies, and procedures and I want to say that is not what we are seeing. The university is being taken over by cartels- some individuals who are rendering existing structures dysfunctional and irrelevant. We are against that.” He said.

“We want to say as a university should be most structured institution. We demand each office do its work and function and was mandated. It is difficult to access the vice-chancellor’s office, in fact waiting for an appointment you wait for long. We want an open door system.” Dr. Kasina went on.