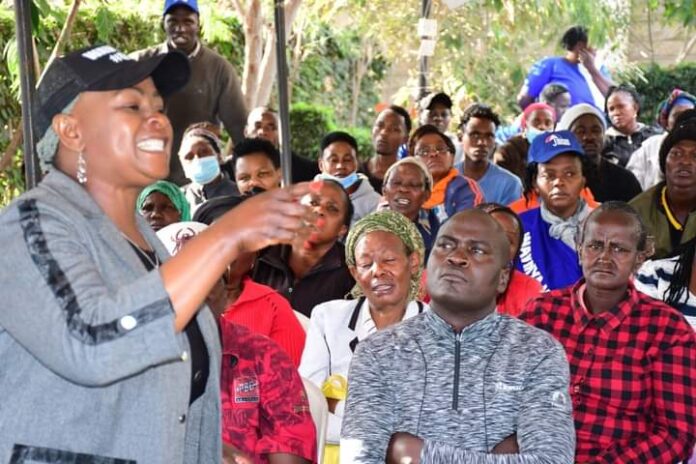 Machakos Wiper Gubernatorial Candidate Wavinya Ndeti has called for investigations by the DCI and NCIC on CCU party leader and Machakos Gubernatorial candidate Nzioka Waita over his “kata-kata” remarks.

Addressing the press at Kinanie after receiving defectors from CCU party, Wavinya said that remarks made by Waita could cause chaos and Machakos county was known to be a peaceful county. She also alleged that Waita assaulted her during Azimio tour to Masinga last month.

The former Transport CAS said that Waita needed to explain in depth what he meant by “kata-kata saying that the word could elicit different actions among people, especially now the campaigns are at their peak.

“As leaders in this county, we will not allow someone to cause chaos among our people. Machakos is known to be peaceful even during the 2007/2008 post-election violence we were still holding our peace so I hereby ask the respective bodies to summon Waita and question him on his remarks,” she said.

“At this time we cannot allow such utterances to be spurred out by political leaders we need to keep our peace as Machakos people we are peaceful and we won’t let it be ruined in any way by anyone,” she added.

Last week while receiving defectors from Wiper and UDA, Nzioka Waita told off Wiper leaders who have been insulting him saying that he will cut them, sort them and kick the Wiper party out of Machakos.

Wavinya’s sentiments were echoed by her running mate Francis Mwangangi who defended Wavinya saying she is a widow and accused Nzioka Waita of sponsoring court cases against Wavinya’s Gubernatorial bid.

“Let him explain to Kenyans what he meant by saying that he will cut and remove people from the county. He started by beating the Wiper candidate, he has been sponsoring court cases on wavinya’s academic qualifications. Everywhere he goes it’s Wavinya this and that. He would rather fight men like us but a widow like Wavinya is a no go zone.” Mwangangi said.