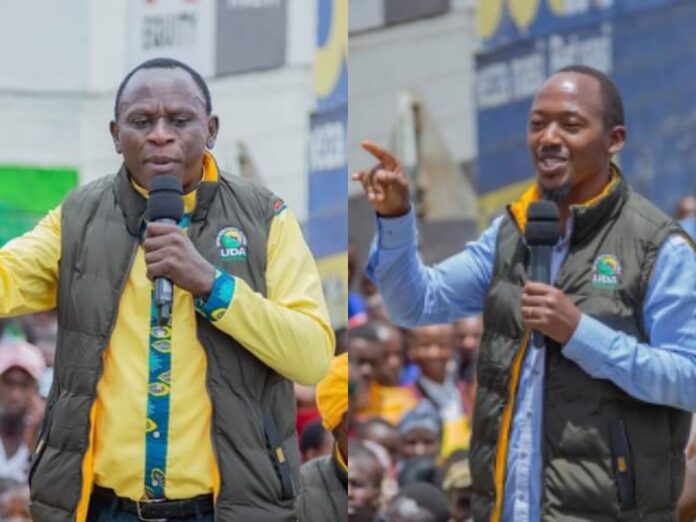 Just a day after Wiper Party leader Kalonzo Musyoka declared war on two lawmakers from UDA, Victor Munyaka from Machakos Constituency and Eng. Vincent Musau (Kawaya) from Mwala, the two have fired back.

In an Exclusive interview with Mauvoo news Mwala MP Eng. Vincent Musau alias Kawaya noted that Kalonzo’s words mean nothing since he is not a voter in his Mwala constituency.

Kawaya said that Kalonzo is mad because he and Munyaka support Deputy President William Ruto and don’t dance to the former vice president’s tune and not because they are not working for mwananchi.

Kawaya added that he is only answerable to Mwala electorate and not Kalonzo.

“He is not a registered voter in Mwala and has never voted for me. He has always had these threats since ten years ago, he told people not to elect me but the people decided to vote for me,” said Kawaya.

“Kalonzo should stop bringing frustrations to me if he is unable to deal with the big boys up there, if he wants my seat let him come and declare interest we square it out” he added.

The second term MP added that the decision as to who will win elections in Mwala does not lie with Kalonzo but the people. Kawaya disclosed that sometime back, the Wiper party was wooing him to vie on a Wiper ticket promising him a direct nomination.

Machakos MP Victor Munyaka on the other hand asked Kalonzo to first fight the poverty in his Kitui home county instead of declaring war against him. He said Kalonzo’s efforts to bring them down were a waste of time.

“This got my attention but i only have just one thing to respond to Kalonzo Musyoka. The only thing Kalonzo should declare war on is poverty raging in his home county Kitui. Trying to bring Kawaya and me down, just because we support William Ruto is waste of time,” Munyaka said.

On Wednesday, While speaking in Machakos, Kalonzo declared war on the Mwala and Machakos Town MPs saying they were being used to undermine him. Missed the story? Check it out Below;