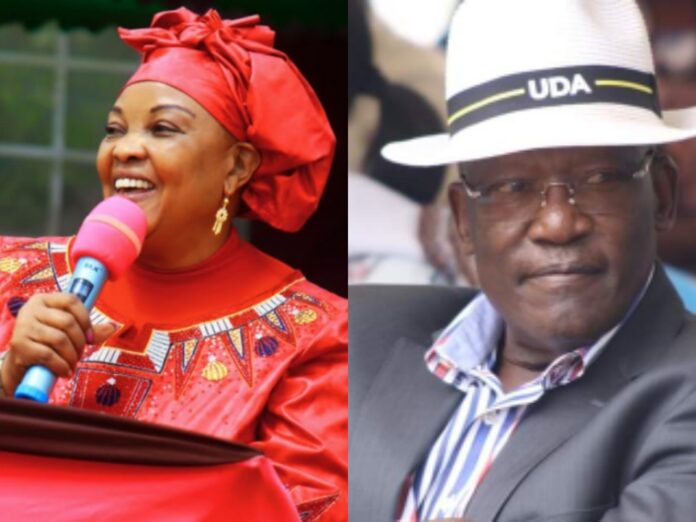 Machakos Senator Agnes Kavindu was on the receiving end after she tried to ask mourners at the burial of Ex-Machakos MP Jonesmus Kikuyu to vote for a Good Governor hinting at endorsing Wavinya as Machakos Governor.

“I will not talk much because we came here for mourning. I am asking for the Governor’s seat more than I am doing that of the senator. This is not to say I am not asking for the Senate seat. I will be on the ballot on the 9th of August.” Kavindu said.

“For the Governor seat, let us choose a person who can lead Machakos and a person who has a passion to help the people. This morning I was called and Informed that at Kola dispensary power was disconnected and women could not give birth at night. Let us elect someone who can help our people.” Kavindu added as shouts of Muthama continued to fill the air.

Kavindu told the mourners that she was not there to play politics and she had the capacity to arrange her own meetings before cutting short her speech and taking her seat.

She However promised to stand with the family of Kikuyu going forward.

“We talked to the wife and the children of the late and what we promised we will fulfill. When there is something in this family as the senator I will come in and help where I can.” She promised.

Last week, a similar situation was witnessed during a fundraiser for Jonesmus Kikuyu burial. PTP Party leader Katuku was shouted down after trying to campaign for Nzioka Waita.

Missed the clip? Check it out on our YouTube channel below;