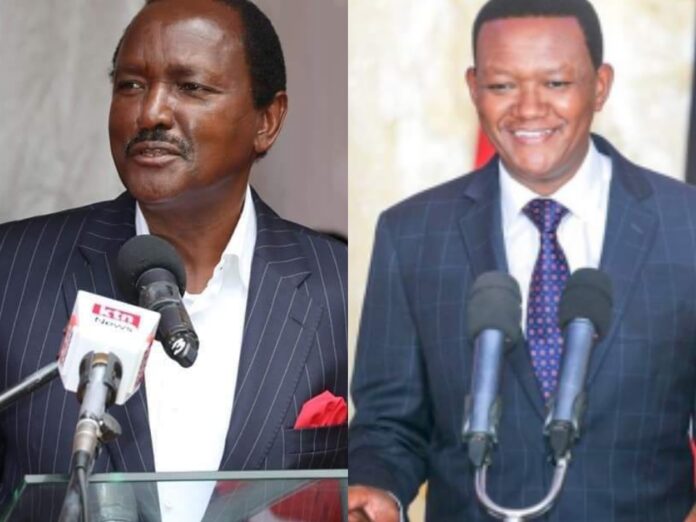 Differences between Wiper Party leader Kalonzo Musyoka and Machakos Governor Dr. Alfred Mutua are now threatening to kill what was termed as “the mother of all coalitions” – Azimio La Umoja bringing together over 26 parties.

Last week, Governor Mutua and Kibwana led smaller parties in Azimio dubbed Mwanzo Mpya caucus to demand the inclusion of the caucus as the 4th Leg of the already existing 3 legged Stool arrangement of ODM, OKA, and Jubilee.

The caucus also demanded an increment of members of the coalition council which was initially 7 and left out representatives of the smaller parties. Failure to have the issues addressed, the members threatened to pull out of the coalition in 48 hours.

The Azimio Flag bearer the next day moved swiftly to avert the crisis and saw the agreement amended to have the caucus as the 4th leg and increased the membership of the coalition council to 11.

Addressing the press on Sunday, Governor Mutua expressed satisfaction with the changes in the coalition agreement and called for a handshake with Wiper party leader Kalonzo Musyoka.

A day later, OKA wrote to the Registrar of political parties issuing a notice of Objection to the Registration of Azimio-One Kenya coalition party. OKA noted that the issue of changing the agreement from a 3 to 4 legged stool and increasing coalition council members to 11 was not deliberated and agreed upon before the agreement was registered.

The Move is seen as an attempt by Wiper to reduce the influence of Maendeleo Chap chap and the smaller parties in the coalition.

Machakos Governor Dr. Alfred Mutua reacting to the demands by OKA said, “I’m therefore surprised that OKA is talking about inclusivity on one hand but advocating for exclusion of over 20 political parties who signed up to form AZIMIO.”

“We were all working well together in the spirit of UMOJA before the document that OKA is insisting be reinstated. The document was creating a power base of only three parties – Jubillee, ODM, and Wiper, excluding all the other parties of AZIMIO from effective and democratic participation in AZIMIO. Why would anyone want to exclude others in a movement of Umoja? Inclusion? Anyone opposed to the expansion of AZIMIO and who wants only a three-legged stool of three parties to be in charge and disregards everyone else, must have plans of blackmail and entitlement. “Mutua added.

“This political selfishness is the problem that we have faced in this country – of leaders and opportunists who whine and blackmail all the time and who put their personal interests and not those of Wananchi first. Azimio La Umoja aims to cure this problem by focusing on Wananchi and how to roll back poverty. I urge H.E. Raila Odinga and the other players in AZIMIO not to bow down to blackmail and extortion but to stand firm in championing democracy, inclusion, politics of transformation, wealth creation, and peace and stability in Kenya. I am confident in our victory within Azimio.” Mutua in the statement to newsrooms went on.